I thought I would follow up my post from a few weeks ago concerning Deacon and collars to write about the liturgical wear of Deacons, especially Dalmatics. The signs of the office of Deacon are a stole that is worn across the body and a dalmatic. Many of you may be asking yourself “what is a dalmatic?”. The dalmatic is a long, wide-sleeved tunic, which serves as a liturgical vestment in the Catholic, Lutheran, Anglican, United Methodist, and some other churches. Like the chasuble worn by Priests and Bishops, it is an outer vestment and is supposed to match the liturgical color of the day. (from Wikipedia)

The difference between the chasuble worn by a Priest and a dalmatic worn by a Deacon comes down to sleeves. A chasuble does not have sleeves and is open-sided. A dalmatic has sleeves. In the early church, Deacons would be responsible for the finances of churches and legend has it that many would keep money hidden in their sleeves to hand out to the poor. I am not sure how historically correct that it is but I like the sentiment. Below is a picture from a recent funeral of Fr John and myself that shows the difference between his open-sided chasuble and my sleeved dalmatic. 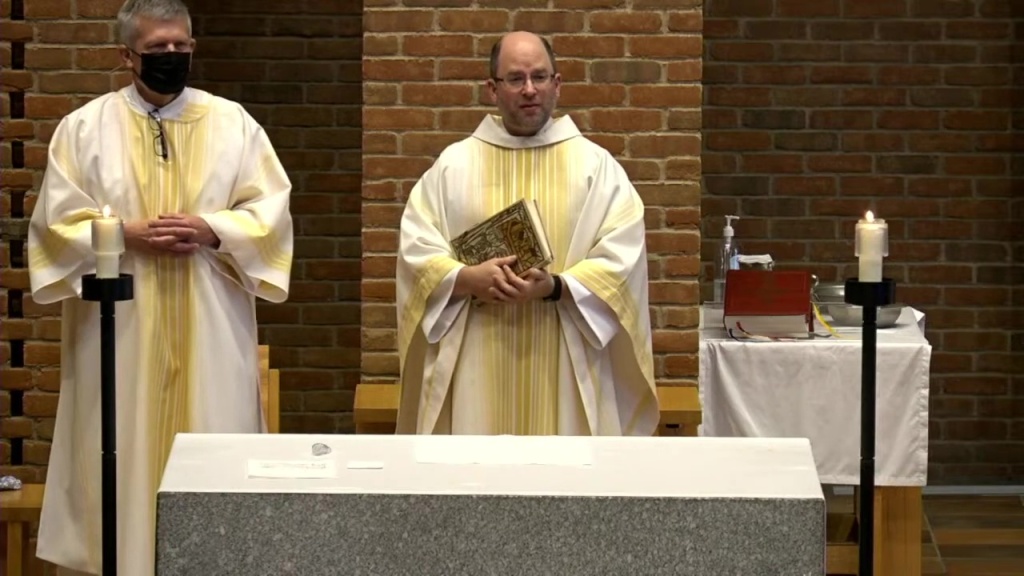 As I mentioned in my blog on Deacons and collars, there was a change in leadership in the office of Diaconate during my last year of formation. About that same time, there were recommendations that Deacons should wear Dalmatics when assisting in the celebration of Mass. My class was informed that we would be wearing dalmatics when being ordained breaking the tradition of simply wearing a stole for ordination. The Archdiocese purchased many matching chasubles and dalmatics for liturgical celebrations and they are still in use 19 years later.

My classmates and I were not real comfortable with wearing fancy liturgical vestments and desired to continue the tradition of wearing a simple stole. We were told; you will wear a dalmatic. We consented and did not choose to die on that hill as there was a bigger hill to defend. That would be the tradition of having the wives of the men to be ordained sit with them on the altar. We were told that the wives would have to remain in the pews, which we fought and I am happy to say we were able to have our wives joins us on the altar during this special time for us as couples. Unfortunately, we were the last class to have our wives join us on the altar during ordination.

A month before our ordination my class along with our wives went on a wonderful weekend retreat with Bishop Frederick Campbell. I asked him about wearing dalmatics and our discomfort with this. He told us that liturgical dress is meant to provide a homogeneous look to the liturgical celebration and not draw attention to any one of the celebrants. I appreciated his answer and could see the truth in it. If you have been to a liturgical celebration at the cathedral, it is hard to distinguish the individual clergy from a distance.

After my ordination, I would usually wear a stole since St Thomas the Apostle did not have any dalmatics. After a while, Fr Tony Andrade and I thought it would be nice for me to have a white dalmatic for special liturgical celebrations. We asked the parishioners if anybody would be willing to fund such a purchase and received a good response. One winter when in India, Fr Tony had the Nuns that made his vestments make me some dalmatics which his mother very generously gave to me as a gift.

My practice after receiving these dalmatics was to wear them while assisting at Mass. This practice continued when I was assigned to St Pascal’s. Through the years I was never that comfortable always wearing a dalmatic. In many of the study groups and other social events at St Pascal’s, I would hear people say it was hard to distinguish between me and the priest when I wore a dalmatic. I would say “look for the sleeves” but they still said it was hard. I then asked Fr Michael Byron if he would object to me reverting to wearing a simple stole on non-feast days and he said he was fine with that. For the past 5-6 years I have been wearing a simple stole during ordinary times, lent, advent and wearing a dalmatic for what I would call higher liturgical celebrations along with funerals and weddings.

It feels more comfortable to me to wear a simple stole and I still feel it is more in keeping with the simple ministry of a Deacon being the servant Christ in the world.